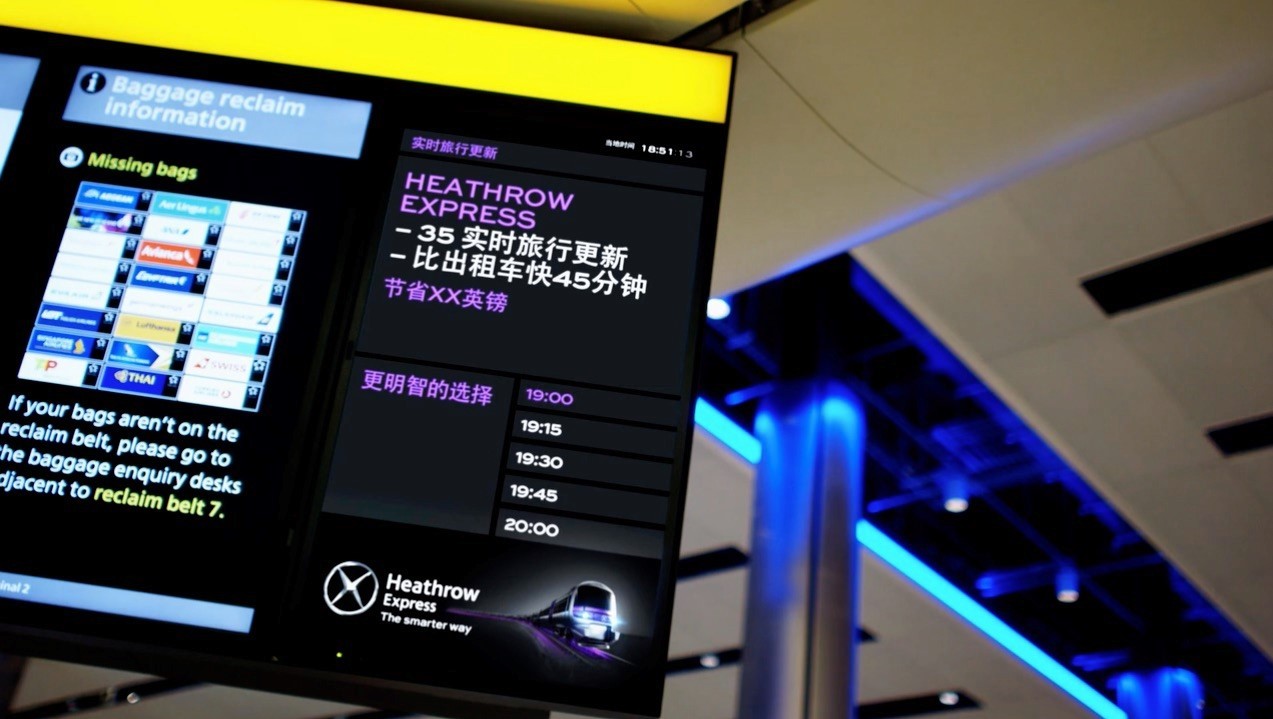 Counting Spanish, French, Italian, German and Portuguese speakers (to name a few) among the talented team at Lotus, it’s fair to say we’re mad about languages. It’s a frequent occurrence to hear several different languages being spoken at one time around the office, whether to our clients and colleagues around the world, or simply practising with one another. With Greek, Catalan, Chinese and Guernsésiais among the some of the other languages of our clients, Google Translate can come in handy too.

What better time to celebrate our multilingualism and love for languages than on International Translation Day on Friday 30 September.

Coinciding with International Translation Day, Heathrow Express announces its support of the #LondonIsOpen campaign and the launch of its first dynamic advertising campaign to be translated into six languages.

Heathrow Express has loaded their smart screens, which are situated in the baggage re-claim area at Heathrow and show live price and journey time comparisons between taxis and the airport’s train service to central London, with Cantonese and five different European languages.

Fraser Brown, Heathrow Express director said: “We want to extend a warm welcome to visitors from across the globe, for whom English is not the first language, by providing them with useful information in their own language to help them make the fastest and cheapest choice of onward travel. Heathrow Express is and always has been, an outward looking company, readily able to engage internationally. Our updated screens completely align with Mayor Sadiq Khan’s campaign that #LondonIsOpen and we are keen to support it.”

Heathrow Express analysed passenger arrival statistics into the airport and their own customer data and are using the top languages spoken by Heathrow Express passengers. Five out of the six top languages are European, with an approximate 3.2 million German speakers flying into the UK on an annual basis*, followed by Spanish, Italian, Swedish, Cantonese, and Finnish. The service will be monitored and reviewed with the plan that more languages will be added in 2017.

Gordon Innes, CEO London & Partners, said: “London is one of the world’s most popular destinations for international tourists and what better way to welcome people than greeting them in their own language when they land. It’s great to see Heathrow Express extending such a warm welcome to visitors and embracing the London Is Open campaign.”

The multi award-winning Heathrow smart screens, were a world-first, and installed in 2015. They combine real-time traffic; weather and Heathrow Express train service information into one user-friendly data feed, at the terminals’ baggage reclaim zones.

Andrew Newman, CEO and Co-founder of DOOH.com, who devised and implemented the technology for the smart screens said: “Research has shown that live data feed campaigns have a 30 per cent higher retention rate than other static ad campaigns. This rate is expected to increase significantly with the Heathrow Express 'Language Comparison Generator', which translates itself into the language of each arriving flight at each baggage carousel.

“With a direct link to Heathrow airports' air traffic control and baggage carousel assignment for each flight, the ad campaign now rotates through both English and the arriving flights language at just the right time when passengers arrive to pick up their bags.”

Following the success of these smart screens, Heathrow Express is using dynamic advertising screens, in English, in strategic transport hubs around the capital as part of its autumn ‘Back to Work’ campaign, which targets business travellers. The screens provide live journey time comparisons between taxis, tube and Heathrow Express from key locations including Kings Cross Victoria and Liverpool Street stations.