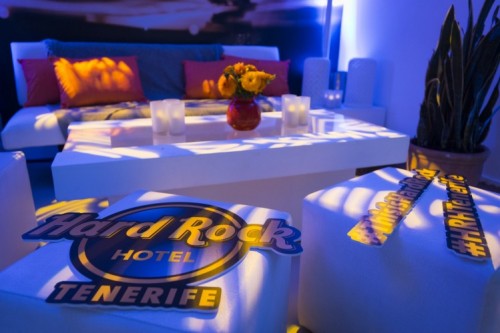 Wednesday 20th July saw the UK launch of Hard Rock Hotel Tenerife with a party for media, trade partners and Hard Rock VIPS at London’s Ice Tank organised by Lotus on behalf of Palladium Hotel Group and in collaboration with Hard Rock International.

The event provided almost 100 party-goers a preview of what to expect at the new hotel, with a basement ‘Beach Club at Hard Rock Hotel Tenerife’ complete with resident DJ and sea views, Canarian-inspired canapés, and a signature ‘El Tiede’ cocktail named after the volcano at the heart of Tenerife. The party also included a taster of Hard Rock brand-wide activities available to guests at all Hard Rock Hotels, such as Rhythm and Motion massages in a specially created Rock Spa, picks. Fender guitar rental and in-room jam sessions, and mix. DJ mixing lessons, while Hard Rock memorabilia was shipped in especially for the night.

Following the successful launch of Europe’s first Hard Rock Hotel in Ibiza, Palladium Hotel Group has again aligned with Hard Rock International to create the second European property on Tenerife’s southern coast, set to open at the end of October 2016.

At the start of the evening, Sergio Zertuche, Sales & Marketing Director of Palladium Hotel Group revealed details of the hotel’s Grand Opening Party on 10th December with a ‘Children of the 80s’ concert on the hotel’s open-air stage. Zertuche announced that the opening line up will feature the Village People, Blackbox, C+C Music Factory, Rozalla and DJ trio Dream Team Reload, bringing the spirit of the 80s to the Canary Islands.

As the evening progressed, cava flowed, cocktails shaken and music pumped from the DJ decks in true Hard Rock party style. Guests left with Hard Rock Hotel Tenerife bags, t-shirts, luggage tags and toiletries, as well as a sense of anticipation for the upcoming opening.

Lotus would like to thank all those that came along to the party (on what was one of hottest nights of the year!)

Please see below for a selection of images of the party and click to download the high res versions.

For the full collection of photos of the event, click here.