One of Lotus UK’s newest clients, Ocean Club Marbella, has kicked off summer with a spectacular ‘White and Silver’ bash on 1st May, and Georgina from Lotus UK was lucky enough to join the party. 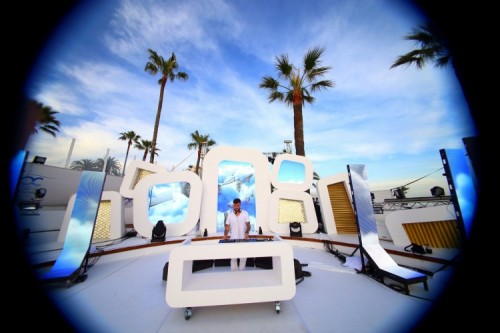 The 36 hour press trip to Marbella, in celebration of the start of Ocean Club’s eighth season, was joined by journalists and bloggers from the UK, the Netherlands and Sweden, plus Annemiek – a representative from our Benelux partner, Tourism Marketing Concepts.

After flying in from all over Europe on Friday morning, the group met and got to know each other over a delicious lunch at the Gran Hotel Guadalpin Banús, a beautiful five-star hotel that sits right on the beach. The hotel is perfectly located less than a ten minute walk along the promenade from Ocean Club, so when we met up again later that evening, we didn’t have far to go in our party-gear before reaching the venue.

Summer officially started at 7pm when Ocean Club’s doors were opened ready to welcome over 1,000 guests from all over Europe. We were greeted by ‘Ocean Club shining Angels’ and led to a VIP table set on a stage built on top of Ocean Club’s central swimming pool with a perfect view of the poolside stage. The white and silver setting was spectacular with fresh white roses adorning the walls and winding around the bar, sparkling fairy lights and beautiful white-feathered table decorations – it took the whole group’s breath away as we wondered through the outdoor party venue.

As the Mediterranean sun went down, Spanish saxophonist LuGotti and his band set the perfect ambience with sax house sounds. The champagne flowed and partygoers indulged in a feast of the Chef’s finest canapés, including mouth-watering sushi, King prawn skewers and tuna carpaccio, fuelling the party ahead.

Providing the soundtrack under a star-studded Mediterranean night sky, OC Resident DJs Eduardo Reyes, B-NY, Nilo Contreras and Jay Saccone returned to the poolside decks to get the crowd to their feet and the dancing started. Throughout the evening, show-stopping entertainers added another dimension to the spectacle, including synchronised gymnasts on trampolines at both sides of the stage, acrobats and circus performers dressed in LED lights, and a breath-taking troop of street dancers led by French breakdancer Joe Yamakasi.

Billed as a secret headline act, British singer songwriter Jess Glynne was revealed at 10.30pm along with her band and backing singers. We danced along to her hit solo singles ‘Right Here’, ‘Real Love’ and ‘Hold My Hand’, as well as special renditions of Clean Bandit’s ‘Rather Be’ and Route 94’s ‘My Love’; songs that Glynne featured on in 2014 transporting her into the limelight.

An amazing firework display rounded off the evening at midnight, lighting up the night sky over the sea, while some revellers continued to party into the early hours as the stellar line-up of entertainment continued.

The following day, the group returned to Ocean Club for a fabulous recovery lunch in the restaurant, where we tried most of the menu. The sushi, grilled swordfish, chicken Caesar salad, calamari, tempura prawns, quesadillas and tomato and mozzarella were particular favourites….!

Many thanks to the team at Ocean Club Marbella for throwing a brilliant party and to Gran Hotel Guadalpin Banús for having the group to stay.

Take a look at the official photos from the party below.

The press trip was attended by:

From the UK: Astrid Carter, Deputy Editor at SheerLuxe, and Laura Bartlett, Editor-In-Chief at House of Coco