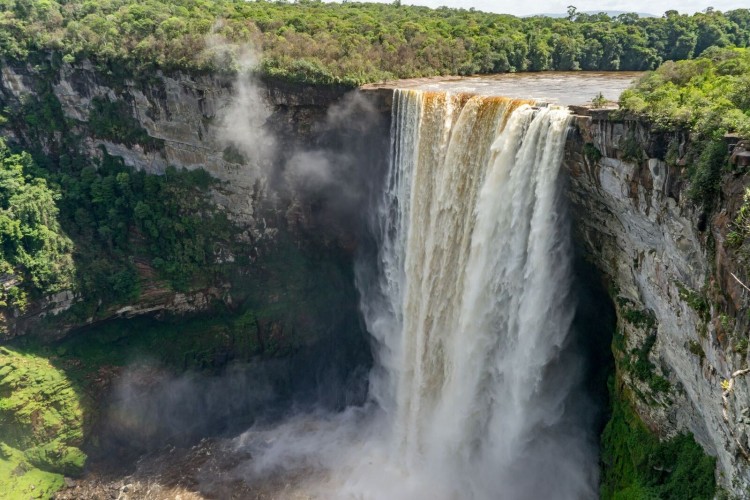 In the midst of a global pandemic, travel has become all but impossible leaving many with a chronic case of wanderlust as they are pent up at home dreaming of their next trip. In order to provide inspiration for a well-earned trip of a lifetime and to scratch the travel itch that so many have, the Guyana Tourism Authority (GTA) is on hand with four ways to experience the magical world of the little-known South American country from the comfort of one’s own home.

Even today the little-known South American country of Guyana remains uncharted territory for man, boasting around 85% forest cover from one of only four primary rainforests in the world. Perhaps it comes as no surprise then that this mysterious land of dense jungle and hidden corners was the inspiration behind Sir Arthur Conan Doyle’s The Lost World. Ancient tepuis (table-top mountains) erupt from the jungle canopy while the thick forest itself hides even the world’s largest single-drop waterfall; Kaieteur Falls. Though Guyana is home to giants such as jaguar, giant river otters, anaconda, giant anteaters and the harpy eagle, travellers will be hoping that the prehistoric giants from Conan Doyle’s novel remain purely fiction.

UK hip hop artist, Loyle Carner, travelled to Guyana in 2019 to discover his cultural roots from his father’s side with legendary Guyanese flautist, Keith Waithe. The pair travelled as part of a BBC Sound Odyssey project titled ‘Loyle Carner in Guyana’ to explore Carner’s cultural heritage via the music and gastronomy of the country. They even worked with local musicians to produce a brand new track inspired by their travels. The podcast wets the wanderlust appetite for housebound travellers as the duo transport the listener to the deepest rainforests of Guyana on a cultural, gastronomical and musical voyage of one of South America’s most undiscovered nations. The podcast is readily available on the BBC Sounds app.

Back in 2008 four heavyweight wildlife presenters, George McGavin, Steve Backshall, Justine Evans and Gordon Buchanan, all travelled to Guyana to document a journey through the unspoilt Guyanese rainforest. On their travels they encounter the unique fauna of the region and go in search of one particularly elusive creature, the mythical jaguar. Highlights from the show include George McGavin climbing into a hollowed-out tree trunk to see what critters are inside and Steve Backshall abseiling the magnificent Kaieteur Falls.

Developer Naughty Dog’s Uncharted: Drake’s Fortune was the first instalment of a series that has since become a PlayStation classic. The action-adventure title sees protagonist Nathan Drake venture travel across Latin America in search of El Dorado. The player delves into the depths of the Amazon rainforest in search of hidden treasures encountering a series of challenges along the way. The immersive experience allows travellers to rekindle their sense of adventure and get a taste of what it’s like to venture into the pristine jungles of Guyana.

As travellers scroll through Facebook or Instagram, it is understandable that one can be overwhelmed with all of the worldly updates for the current circumstances. The Discover Guyana feed aims to cut through all the noise bringing great stories from the country that show the human side to tourism. The Discover Guyana pages are still active and sharing images and content that will inspire, remind travellers that there is still plenty of beauty in the world, and give them a taste of what discoveries await them in Guyana.

Guyana tour operator, Wilderness Explorers, has prepared a video to encourage travellers to postpone their trip to Guyana rather than cancelling. Featuring the amazing scenery and activites available in Guyana, the video encourages viewers to discover the adventure that awaits in this little-known corner of South America. Take a look below:

About the Guyana Tourism Authority. The Guyana Tourism Authority (GTA) is a semi-autonomous governmental organisation responsible for developing and promoting sustainable tourism in Guyana through collaboration with sister agencies and the tourism private sector in order to maximise local socio-economic and conservation outcomes and improve the visitors’ experience. The GTA is focused on Guyana becoming recognised locally and internationally as a premier destination for protecting its natural and cultural heritage, providing authentic experiences, and maximising local economic benefits. For more information, visit www.guyanatourism.com or call (592) 219-0094.

Find out more about @DiscoverGuyana's ways to experience this little-known South American country from the comfort of your own home. #discoverguyana #guyana #armchairtravel #sofaescape